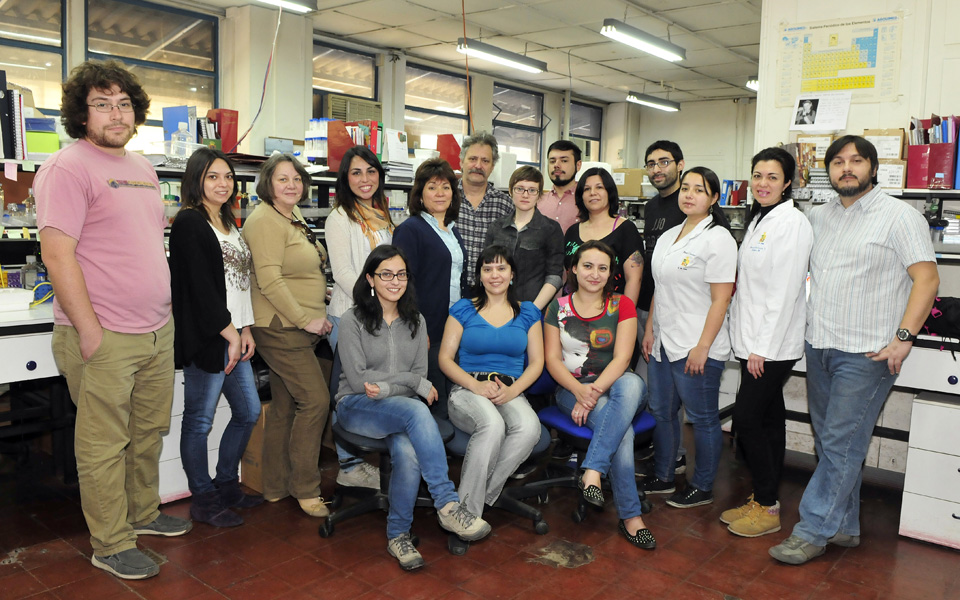 Cancer is a leading cause of morbidity and mortality in humans. Research in this laboratory focuses on gaining insight to three major questions relevant to cancer development and progression: First, how some proteins can switch from being tumor suppressors to promoting metastasis or vice versa in a manner dependent on the cellular context, using the membrane-associated protein caveolin-1 and the inhibitor of apoptosis protein survivin as models; second, how cell death programs are initiated following autophagy and how they can lead to regulated necrosis; third, how interaction of the pathogen Helicobacter pylori with human gastric and intestinal cells affects cell signaling and viability and how these events relate to the development of gastric cancer, a leading cause of cancer deaths in Chile. To achieve these objectives, we apply a large variety biochemical, molecular biology and also imaging techniques to analyze effects in a large number of availlable cancer cell lines. Additionally, we use different mouse models for in vivo studies and also analyze samples from human patients. We anticipate that insights gleaned from such studies will aid in developing more effective tools for early detection and treatment of cancers that affect the Chilean population.

Caveolin-1 related work. Results from the literature have implicated the protein caveolin-1 (CAV1) as a tumor suppressor protein in a variety of cellular settings (summarized in Quest et al., 2004).

Data from this laboratory demonstrated that CAV1 expression is down-regulated in human colon cancer and re-expression of the protein in human colon adeonocarcinoma cell lines is sufficient to reduce tumor formation in nude mice (Bender et al., 2000; Bender et al., 2002). Thus, CAV1 functions as a tumor suppressor in this particular cellular background and efforts in the laboratory have focused on identifying mechanisms that explain this ability. Specifically, we have identified the inducible isoform of nitric oxide synthase (iNOS), implicated as an epigenetic factor linked to cancer progression, as a downstream target. CAV1 was shown to reduce iNOS levels via an unanticipated, post-transcriptional mechanism that involves recruitment of the protein to detergent insoluble membrane microdomains via a putative WW-domain and subsequent proteasome-mediated degradation of the protein (Felley-Bosco et al., 2000; 2002).

In a screen for differences between cancer cells expressing or not caveolin-1, the inhibitor of apoptosis protein (IAP) survivin was identified as a downstream transcriptional target whose expression is controlled via the β-catenin/Tcf-Lef pathway. This protein is of particular interest in cancer biology given that its expression is augmented in essentially all human tumors and is associated with enhanced viability and malignancy of tumor cells. Consistent with this notion, work from this lab has shown that inhibitors of the kinase CK2 promote tumor cell death and do so by precluding the ability of this kinase to promote β-catenin/Tcf-Lef-dependent transcription of survivin (Tapia et al., 2006). Likewise, CAV1 recruits β-catenin to the plasma membrane, thereby reducing the cytosolic pool available for transcription of survivin and, in doing so, reduces cell viability (Torres et al., 2006). In a similar manner, CAV1 also suppresses the expression of cyclo-oxygenase 2 (COX2) and the production of the pro-inflammatory cytokine prostaglandin E2 (Rodriguez et al., 2009).

Evidence available in the literature indicates that CAV1 function is cell context dependent and that it may both act as a tumor suppressor or, to the contrary, promote for instance metastasis (discussed in Quest et al., 2008; 2013; Nunez et al., 2014). Mechanistically speaking, this dramatic switch in function remained an enigma until studies from this laboratory showed that CAV1 is only able to suppress survivin and COX2 expression in the aforementioned manner in cancer cells when E-cadherin is present (Torres et al., 2007; Rodriguez et al., 2009). Thus, caveolin-1 is a conditional tumor suppressor protein whose function in part depends on the presence of E-cadherin.

To validate these observations in vivo, B16F10 melanomas lacking both CAV1 and E-cadherin were employed. When subcutaneously injected these cells form solid tumors in immunocompetent, isogeneic C57BL6 mice. Alternatively, injection into the bloodstream leads to lung metastasis. This model provides a unique system to evaluate CAV1 function in vivo. Our experiments revealed that CAV1 expression in B16F10 cells reduces subcutaneous tumor growth even in the absence of E-cadherin, but that tumor suppresion is greatly enhanced when both proteins are expressed together, presumably due to loss of survivin and enhanced cell death (Lobos et al., 2013).

Current and future studies seek to achieve the following objectives: 1) To understand mechanistically how E-cadherin modulates CAV1 function in such a dramatic way; 2) to identify molecular traits in CAV1 associated with its role either as a tumor suppressor or promotor of metastasis; 3) to understand how CAV1 functions as a tumor suppressor in the absence of E-cadherin and 4) to understand how CAV1 connects to Rac1 and promotes metastasis. Recent reserach in this last area has lead to the identification of a novel CAV1-Rab5-Rac1 signalling axis (Diaz et al., 2014).

Cell death related work. The general interest of this laboratory in lipids and lipid second messengers has lead to a studies that linked delayed elevation of ceramide downstream of the Fas receptor to caspase-dependent necrotic cell death in lymphocytes (Hetz et al., 2002; Hetz et al., 2005). This unconventional cell death mode relies on the production of reactive oxygen species following ceramide-induced damage to the mitochondria and subsequent GSH and ATP depletion (Villena et al., 2008).

More recently, we demonstrated that lympocytes release ATP upon Fas receptor ligation not only to attract macrophages as had been reported, but also to accelerate execution of the cell death program by activating P2X7 receptors (Aguirre et al., 2013). Finally, we are currently evaluating whether and how CAV1 modulates autophagy to promote cell death as mechanism that might explain CAV1-mediated tumor suppression in the absence of E-cadherin. Our interest in obtaining a better understanding of cell death mechanisms resides in their potential to facilitate development of drugs that may be employed to induce selective cell death in tumor cells (discussed in Diaz et al., 2005; Henriquez et al., 2008).

Helicobacter pylori related work.The development of gastric cancer associated with Helicobacter pylori (H. pylori) infection has been linked to oxidative stress generated in part due to an immune response against bacterial virulence factors. H. pylori gamma glutamyl transpeptidase (GGT) is a secreted enzyme that contributes to production of reactive oxygen species and is associated with peptic ulcer development. Alternatively, although expression of the inhibitor-of-apoptosis protein survivin in adults is frequently linked to the development of cancer, evidence indicating that the protein is present in normal gastric mucosa is also available.

Our results confirmed the presence of survivin in normal human mucosa by immunohistochemical analysis using tissue microarrays and furthermore revealed that infection with H. pylori decreased survivin protein levels in the mucosa of patients with gastritis. Also, survivin down-regulation correlated with apoptosis and loss of cell viability in gastrointestinal cells co-cultured with different H. pyloristrains, including the completely sequenced strain H. pylori 26695. Moreover, overexpression of survivin was sufficient to reduce death of gastric cells after infection with H. pylori 26695. (Valenzuela et al., 2010). Interestingly, infection with different H. pylori mutant strains, lacking some of the most common virulence factors (CagA, VacA, LPS), did not affect their ability to down-regulate survivin, Given these observations, we then evaluated whether GGT activity may be responsible for loss of survivin. To that end, MKN45 and AGS gastric cells were exposed to either wild type or isogenic DGGT mutant H. pylori 26695 or to their respective filtered culture supernatants. H. pylori wild type bacteria or their culture supernatants were found to reduce survivin expression and cell viability.

In contrast, DGGT mutant bacteria or the respective culture supernatants were unable to induce similar effects. Interestingly, the iron chelators Tiron or Deferoxamine, but not the antioxidant Trolox, precluded survivin down-regulation. These results indicate that H. pylori-induced loss of survivin and gastric cell viability depend on Fe+2 availability in cells (Valenzuela et al., 2013). These findings are important for at least two reasons: First, they provide mechanistic insight to how H. pyloripresence in the human gastric mucosa may lead to damage of the epithelial layer. Second, they open up the possibility of developing effective non-invasive tools for early diagnosis and treatment using nanotechnology. 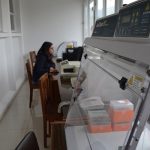 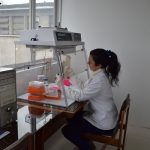 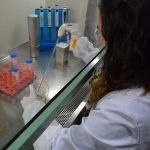 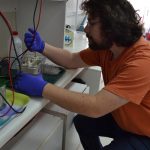 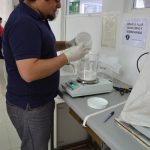 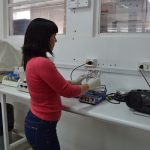